The Mercedes-Benz 124 chassis was the company’s midsize offering from the early 1980s through 1995, taking the form of the 300E, 260E, later the E320, and some higher-performance variants like the 500E. These are considered somewhat legendary as the last of the over-engineered Mercedes-Benz midsize cars.
Alas, that kind of quality meant these were expensive cars in their day, and the introduction of Japanese luxury brands like Lexus and Infiniti caught Mercedes a bit flat-footed when the new competitors were introduced to the U.S. market.
In 1989, the new silky-smooth V-8-powered Lexus LS400 undercut the midsize inline-six Benz 300E in cost by a substantial margin. For perspective, you could get a more powerful, leather-clad large sedan from Lexus, with a Nakamichi stereo and modern accoutrements, for nearly $10,000 less than a smaller Mercedes with an inferior stereo (and not a single cup-holder in sight). The definition of the luxury car was changing quickly, and the Mercedes 124 chassis seemed to represent the last of the old guard.

The ultimate expressions of this chassis were the coupes and convertibles, known earlier as the 300CE and, beginning in 1994, the E320. The two-doors featured a new twin-cam 24V inline-six with 217 horsepower over the previous workhorse 170-hp I-6. Note that despite the naming convention, the CE coupes and cabriolets already had the larger twin-cam engines even in “300CE form.” These were silky smooth, quiet, and exceedingly expensive cars. In fact, the Cabriolet had a base price of over $86,000 in 1994 dollars, equivalent to more than $145k today. And at that price, you still didn’t get cup holders or even a glove box (which was now replaced with a passenger side airbag).
You did, however, get a conservatively-styled large convertible capable of carrying four adults, a thickly insulated power top that hid below a powered rear cover, and overall impressive build quality. There were little robotic arms to hand front-seat occupants their shoulder belts and other safety items like a rollover system comprised of a strengthened windshield frame and beams that would pop up behind the rear seats if a rollover was imminent.
Alas, unlike many other German cars of the era, the Mercedes 124 hasn’t seen much value appreciation in the past few years. Of course, there were literally millions of sedans sold around the world during its run. Wagons, coupes, and convertibles are relatively rare, however, and have a strong following amongst Mercedes-Benz aficionados. Still, Hagerty values for these convertibles have stayed essentially flat for the past five years. As they near the 25-year-old mark, perhaps this spells opportunity for a discerning Mercedes-Benz shopper? 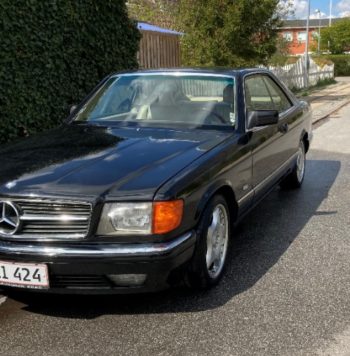